Superior Bearing & Supply will include DAYLube NanoCeramic Racing Grease with its performance bearing kits beginning in 2015, and has been selected as an authorized distributor of DAYLube.

The decision was made after extensive research and thorough testing of various greases, according to a company announcement.

“Bearing grease is vital to the success of our performance bearing kits. Our customers need the best grease available. We researched several varieties and DAYLube was the clear winner,” said Wes “Junior” Ripperger, Superior president. “When coupled with treated bearings, customers can use up to 2/3 less DAYLube than traditional grease and expect a reduction in drag due to reduced volume of grease.”

During the evaluation, Superior customers from various racing circuits tested the DAYLube product firsthand and reported favorably, the company noted. 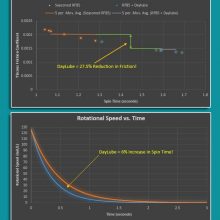