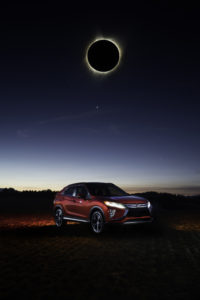 North America on Monday was treated to an unforgettable total solar eclipse that traveled across the entire contiguous U.S. for the first time in 99 years. Mitsubishi Motors ensured all Americans had the opportunity to view the eclipse in the path of totality by live streaming the phenomenon as it first entered U.S.

As a part of Mitsubishi’s marketing launch efforts surrounding the all-new 2018 Eclipse Cross crossover SUV, the company brought social influencers from 10 different countries to just outside of Salem, Oregon to share the unique experience with their followers.

Viewers of the live stream were also given a first-look at the production shoot of the Eclipse Cross as Mitsubishi captured both eclipses in the same shot. Assets from the shoot will be used for global marketing purposes, and will be displayed at the Los Angeles Auto Show when the Eclipse Cross makes it North American debut.

“It was an unprecedented marketing opportunity that we just couldn’t let pass us by,” said Francine Harsini, senior director, marketing, MMNA. “It’s a big year for us at Mitsubishi Motors, and to kick off the campaign for the all-new Eclipse Cross CUV by successfully capturing content beneath a total eclipse of the sun was monumental.”

Additionally, the Eclipse Cross made its TV debut in New York City’s Times Square as a part of this morning’s episode of “Good Morning America.” Mitsubishi Motors was the exclusive sponsor of ABC News’ ‘The Great American Eclipse’ live coverage event of the total solar eclipse. Live footage at the point of totality and five co-branded promos aired during the broadcast.

The Mitsubishi Eclipse Cross CUV will go on sale in North America in early 2018.