Shelby American is launching the newest Shelby Mustang to wear the legendary Super Snake badge, which will be based on the 2015 model Ford Mustang GT.

With the option of more than 750 horsepower, as well as unmatched performance enhancements to the handling, braking and cooling of the Ford Mustang GT, the new Shelby Super Snake continues the lineage of the best-selling and most sought-after Shelby car, according to the company. Additionally, it will be the first Shelby Super Snake also available with an automatic transmission. There will only be 300 total 2015 model year Shelby Super Snakes built.

“When Shelby American introduced the 605 horsepower Super Snake in 2007, the car became an instant sensation,” said Joe Conway, CEO of Shelby American and co-CEO of Carroll Shelby International. “The new Super Snake is even better because the all new Ford Mustang is such a terrific platform for the iconic muscle car. By working closely with our partners at Ford Performance, Weld Racing, Michelin, Carbon by Design and Whipple and Kenne Bell superchargers, the 2015 Shelby Super Snake is an amazing car with world-class performance.”

“Shelby American and the Ford team took the terrific Mustang to new extremes in the car’s performance capabilities,” said Henry Ford III, Ford Performance marketing manager. “The close relationship between Ford Racing and Shelby demonstrates our ability to work together to deliver some of the most exciting Mustangs ever built. The Shelby Super Snake is another example of how we are developing the kind of cars that enthusiasts want.”

The 2015 Shelby Super Snake will deliver both snap-you-into-your-seat-straight-line acceleration, as well as racetrack-tuned cornering performance. It is capable in any situation, from running on the track to the drag strip, through the canyons or around town and on the way to the local car hang-out, according to Shelby.

Aesthetically, the car has signature Super Snake striping and a carbon fiber hood with a forced-air scoop plus a host of aerodynamic enhancements including a larger rear spoiler. Inside, the car has special badging, upgraded badged upholstery, floor mats and a three-gauge dash pod. The Shelby Super Snake is also 50 state emissions legal in the U.S.

“The latest evolution of the Shelby Super Snake is based on developing the most road-and track-capable Mustang we’ve ever built, from the suspension to the bodywork and choice in high performance superchargers,” said Shelby American vice president of operations Akos J. Feher. “We saw this as a great opportunity to create the type of car that appeals to both the traditional Shelby Super Snake owner, as well as to the driver who demands world-class handling with stellar braking and higher horsepower capabilities. It is a refined car with a premium, quality feel. After extensive testing and development on the racetrack and street, we feel that this is our best supercharged performing and sounding, muscle car to date.”

Shelby Super Snakes have been revered since the car was first launched. They continue to attract great demand and command a premium in their resale, according to Shelby.

“The first generation Shelby Super Snakes are among the hottest collectible cars in history,” said Gary Schechner, Shelby American vice president of marketing. “With the success and press praise garnered by the launch of our 2015 Shelby GT earlier this year, not to mention the positive feedback and customer demand for even more performance, we’re excited to make a limited number of these high-performance cars available. And now that we’re offering an automatic transmission option, we expect even more people to be able to enjoy the Shelby Super Snake experience without needing to be bothered with a stick shift. Carroll would have loved this car.”

Each 2015 Shelby Super Snake begins as a Ford Mustang GT with a 5.0 liter V8 and Ford Performance supercharger connected to a six speed manual or automatic transmission. Ford Mustangs are manufactured in Ford Motor Company‘s Flat Rock, Michigan plant and the Shelby Super Snake is built at Shelby American in Las Vegas. 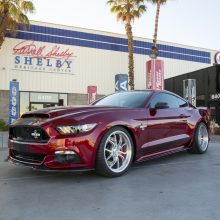 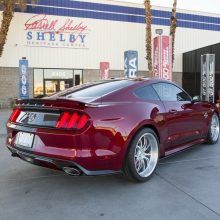