Spurring a spirited bidding contest between collectors in the room and on the phones, seven bidders competed for the iconic daily driver of legendary rocker Janis Joplin. The outstanding sales price represents a new record for any Porsche 356 sold at public auction, according to RM Sotheby’s.

Purchased by the Queen of Rock’n’Roll from a used car lot in 1968, Joplin engaged Dave Richards, a friend and roadie with her band, Big Brother and the Holding Company, to customize it with a psychedelic ‘History of the Universe’ mural, rendering it one of the first true art cars and one of the most famous and important Porsches of all time, according to RM Sotheby’s. The car was offered by Janis’ siblings, Michael and Laura Joplin, fresh from 20 years on display at the Rock and Roll Hall of Fame Museum in Cleveland.

Other early highlights of RM Sotheby’s ‘Driven by Disruption’ sale included a 1972 Lamborghini Miura P400 SV by Bertone, which sold for $2.42 million before a packed house. 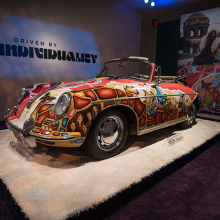