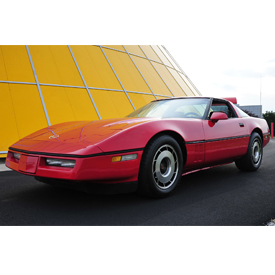 Family, friends and Corvette enthusiasts gathered April 29 at the National Corvette Museum in Bowling Green, Kentucky for the unveiling of a special, fully restored bright red 1984 Corvette. The car belonged to Burke Rhoads, a Nicholasville, Kentucky police officer who was killed in 2015 in a car accident while on duty. Rhoads had been restoring the Corvette and promised his daughter Jacquelyn that she could drive it to her prom when she turned 16.

Rhoads’ wife Melissa wanted to finish the project and asked museum staff for a referral to a shop that could paint the car.

The management team at the museum, after reviewing the situation, in a gesture of appreciation to the nation’s police forces, a tribute to Officer Rhoads and to help a grieving family heal, offered to restore the entire car. The museum’s vehicle maintenance and preservation coordinator Daniel Decker took charge of the project.

The Corvette community, including Corvette Central and members of the Bluegrass Corvette Club, stepped up to help with cash donations and parts. Once the car’s mechanicals and body were restored, the museum turned to PPG for help with the finish.

“Contributing our products for this worthwhile cause was something we were happy to do,” said Bill Shaw, PPG director of marketing. “We were humbled by the request. It is a pleasure and a privilege to help the family members of those who serve and protect us every day.”

The museum already had a relationship with PPG, established in February 2014 when a sinkhole under the museum floor swallowed eight rare Corvettes, including the 1984 Indy 500 PPG pace car.

“We were honored to be asked,” said Eric Ingram.

“We’re both dads, we’re part of the community and this is a special way of giving back,” added Chase Ingram.

The car’s gleaming red finish complemented the red interior, which was made special when the museum stitched Officer Rhoads’ uniform badge and name tag into the center console to honor his memory.

“This project has been a labor of love for the museum team and everyone who contributed to it,” said Katie Frassinelli, the museum’s marketing and communications manager. “We were grateful to participate. We have always tried to extend that gratitude to law enforcement; to be able to translate that into an act of kindness was very meaningful for us. It’s wonderful to help bring a dad’s promise to fruition.”