A PPG-painted 1962 Chevrolet Bel Air Bubbletop was named the 2015 Barrett-Jackson Cup Ultimate Best of Show winner Aug. 8 at Circus Circus in Reno, Nevada. The award was presented during the final evening of the three-day Barrett-Jackson Reno Tahoe collector car auction. The car is owned by Randy and Lisa Wilcox and was built by Andy Leach at CAL Automotive Creations in Bennington, Nebraska.

Hutton has won the Ridler Award three times (2005, 2007, 2013), and has received several Street Rod of the Year, Custom Rod of the Year and America’s Most Beautiful Roadster awards, along with many other top prizes. He established his painting credentials early in his career with appearances on the Discovery Channel’s American Hot Rod, TLC’s Overhaulin’ and on Hot Rod TV.

The Barrett-Jackson Cup was established in 2013. The Ultimate Best of Show award brought with it a prize package worth almost $60,000. 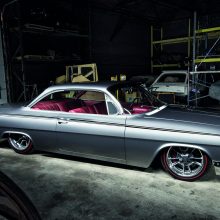