The new Lexus LF-C2 Roadster concept will be revealed to the public at the Nov. 17-19 Los Angeles Auto Show.

The concept is derived from a pure and simple sports coupe idea, with a highly styled 2+2 layout. Designed to give driver and passenger the best top-down driving experience, it has no roof or cabin covering of any kind.

The exterior styling was influenced by the way surface shapes interact with different type of light, according to Lexus. The designers created edges, planes and curves that allow LF-C2 to project a different character when seen from different angles and in different lighting conditions. This approach, combined a layered paint process, results in a striking appearance and a progressive interpretation of an open-top luxury GT.

The show car’s golden yellow finish has been created using a multi-layered paint process. A primer coat is followed by silver, a clear coat, then a yellow which reflects off the silver to create a brilliant luster, followed by a top coat.

“We’ve been instinctively drawn to and inspired by those things that capture the beauty of light. When you put something in the right light, people see it in a way they never have before,” said Yasuo Kajino, LF-C2’s chief designer.

The concept displays an experimental rendering of Lexus’s signature spindle grille design, using a braided mesh effect which represents Lexus craftsmanship, and which changes appearance when viewed from different angles and in different light, according to the company. It sits between triangular LED headlights-a shared feature of Lexus sports cars-and indicator lights that initiate a character line that sweeps through the arrow-shaped body to the car’s abbreviated tail section. Vents in the front bumper direct cooling air to the brakes and help manage airflow to keep the front end stable at high speed.

The profile displays a sweeping line from the front bumper fin to the steeply angled A-pillar. Small vents in the side sills direct air to the rear brakes, exiting through fin-like rear diffusers. The rear end features L-shaped tail lights, chrome-tipped quad exhaust pipes and a pronounced new rear diffuser design. The concept is fitted with five-spoke 20-inch alloy wheels.

Inside, the cabin is spacious and luxurious, matching the sporting elegance of the exterior, according to Lexus In fact the exterior styling extends into the cabin, with the centre console originating from the rear deck in a line that runs the length of the cabin to the dashboard. The dashboard itself displays a functional simplicity with an attractive but straightforward instrument cluster, a central video monitor controlled by a remote touchpad and a classic analogue clock set between the central air vents. The qualities of a driver’s car are reflected in the thick, leather-wrapped steering wheel and form-fitting seats.

The interior designers, according to Lexus, sought a balanced atmosphere of power and simplicity that connects with the primary senses: white and grey leather surfaces are soft to the touch, and LED lights run the length of the interior below the window line. 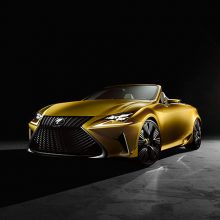 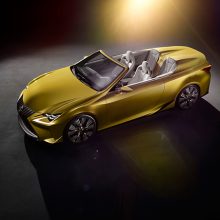 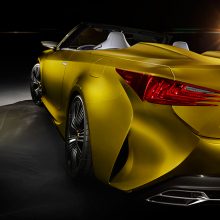 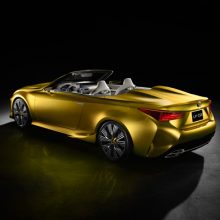 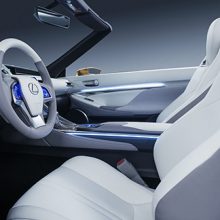 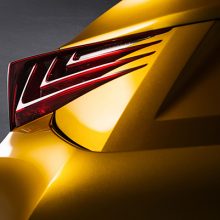 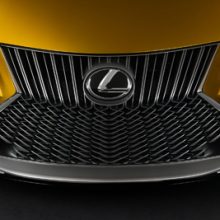 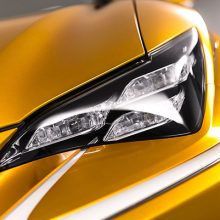 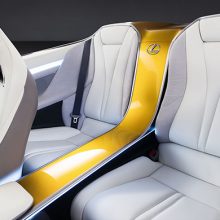 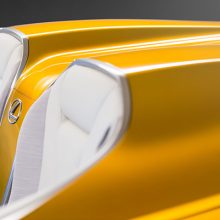