Two luxury automobiles of the limited edition DiMora Vicci 6.2 Emperor Series will be on display at the upcoming Los Angeles Auto Show. Press and media days for the show are open Nov. 17-19 and the public show runs Nov. 20-29 at the Los Angeles Convention Center.

DiMora Motorcar founder Sir Alfred J. DiMora will be on hand Nov. 19 to answer questions about the cars.

The visually-arresting DiMora Vicci 6.2 Emperor convertible is the result of a collaboration between DiMora and Totemic Energy Artist pioneer Master Lee Sun-Don of Taiwan. Each original large-scale painting in the Great Treasure Gate series pays artistic homage to the rare door knockers created during the Ming Dynasty (1368 to 1644). The artisans at DiMora Motorcar invested 750 man-hours to reproduce the artwork onto the hood and side panels of the cars, right down to hand laying 24-karat gold leaf as a final step. As an added bonus, the DiMora exhibit will also feature one of the original paintings by Master Lee Sun-Don.

“I love cars and I love art, so I set out to collaborate with world-renowned artists to create the first true limited-edition production rolling art. Each artist that I am working with is hand-picked by me,” DiMora said.

DiMora has been in the automotive business for nearly 40 years, having owned Clenet Coachworks. The Clenet was named the “American Rolls-Royce” by Fortune magazine. The DiMora Vicci 6.2 is commanding the same level of respect, according to the company.

Master Lee Sun-Don’s popularity worldwide continues to make him a highly sought-after artist. His artwork is currently showing in galleries around the world, including Beverly Hills, Hong Kong, Shanghai, and Taipei, to name but a few.

“Each year at the LA Auto Show, we showcase all that the automotive industry has to offer from style and luxury to technology and fuel efficiency. The DiMora Motorcar exhibit delivers an amazing car in the Vicci 6.2 and the story behind the limited-edition series is something that visitors to the auto show are really going to appreciate,” said Brendan Flynn, vice president of marketing and communications for the Los Angeles Auto Show.

The 2,820-pound car has gold and gold leaf strategically placed throughout the automobile; an aluminum radiator; a 6.2-liter aluminum engine; a Bosch Hydro-Boost Power Booster; state-of-the-art electronics; wire wheels; racing suspension; an aluminum drive shaft; Italian leather; and English Wilton Wool carpet to add to the luxury ambiance. Accompanying the 430-hp engine is an aluminum four-speed or six-speed paddle shifter along with a posi rear end. 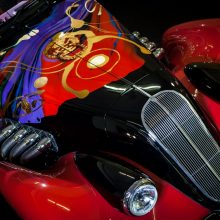 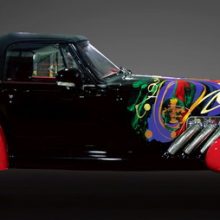 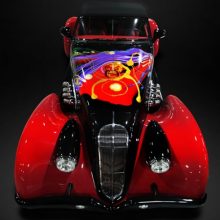