Motor Trend has selected the 2016 Mercedes-AMG GT S as its 2015 Best Driver’s Car, according to TEN: The Enthusiast Network.

“The Mercedes-AMG GT S has the sharpest, most precise steering we have ever felt on any Mercedes or AMG vehicle,” said Motor Trend editor-in-chief Ed Loh. “It makes massive power from a compact, high-tech turbocharged V-8 engine. What most impressed my team is how well the GT S was able to combine these elements. It put all 503 of its horsepower to the ground like an all-wheel-drive supercar and gripped the road through high-speed corners like a winged racer.”

To determine the 2015 Best Driver’s Car, each of this year’s competitors was driven on the open road and track-tested at Mazda Raceway Laguna Seca to discover the one vehicle that offers enthusiasts the most engaging and rewarding driving experience possible. In addition to the hot laps and road loops, a full suite of performance data was collected and evaluated by the Motor Trend team using some of the industry’s most advanced equipment.

“The Mercedes-AMG GT S was developed entirely in-house by the racing experts at Mercedes-AMG, and we are extremely proud to accept this honor on behalf of our employees here in the U.S. and the talented team in Affalterbach who continue to push the boundaries of high performance, exclusivity and overall driving pleasure,” said Stephen Cannon, president and CEO of MBUSA. “From its powerful new AMG 4.0 liter V8 biturbo engine, lightweight aluminum construction, optimum weight distribution and highly emotional design, this dream car is the culmination of a triumphant motorsport heritage and an unwavering focus to consistently deliver the AMG brand promise of Driving Performance on every level.”

Established in 2009, the Best Driver’s Car competition is a massive six-day production that includes a staff of 25 editors, photographers, video producers, and championship-winning race driver Randy Pobst, all deployed to properly test, review, and film a 10-car field of the year’s highest-performing sports sedans, coupes, hatchbacks, and roadsters.

“Our 2015 Best Driver’s Car competition saw the return of some true legends, including a 650-hp Corvette Z06; the fourth-generation definition of lightweight driving fun, the Mazda MX-5; and latest, greatest version of a previous winner, the Porsche Cayman GT4,” Loh said. “But the newcomer Mercedes-AMG GT S bested them all with its combination of breathtaking power, endless grip, and soul-stirring handling. Congratulations to the Mercedes-AMG GT S, MOTOR TREND’s Best Driver’s Car for 2015.” 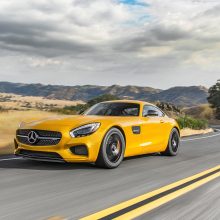