Motorama shows staged by General Motors marked the pinnacle of the automotive hobby, when crowds would get their first glimpse at prototype and concept vehicles. One such vehicle, a 1954 Corvette Corvair Motorama Clone, will be on display at Corvette Funfest 2015, set for Sept. 17-20 in Effingham, Ill.

In 2010, Indiana native Mike Terry purchased a 1954 barn find from New Jersey with intentions to recreate the stunning looks and style of the Motorama car. He enlisted the help of Brett Henderson and Blue Flame Restorations to bring his vision to life. Four years of restoring, fabricating and upgrading virtually every inch of the Corvette successfully created a faithful clone of the Corvette Corvair Motorama car. His progress was charted online with a blog that included work updates and photos of the car.
In November of 2014, as the project was nearing completion, Terry and Henderson submitted paperwork to Amelia Island Concours d’Elegance for the March 2015 Outstanding Car exhibition. They were accepted and as the deadline approached, Terry posted updates without photos, saving the big reveal for Amelia Island.
The 1954 Corvette Corvair Motorama Clone features the same aircraft-inspired roof and European styling of the original.

Registration for the Corvette Funfest at www.corvettefunfest.com. 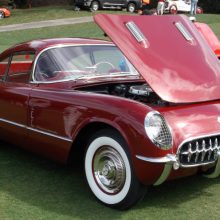