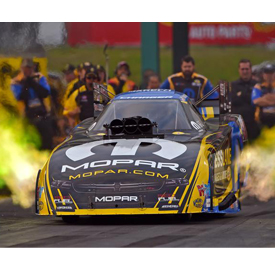 Entering the event near Denver, Mopar-backed drivers and teams from Don Schumacher Racing (DSR) have dominated the 2017 season and will aim to maintain their success at the brand’s 29th consecutive year of sponsoring the popular stop at “Thunder Mountain.”

Mopar HEMI-powered DSR Dodge Charger R/T Funny Cars have claimed a whopping 12 of 13 event wins to date, with defending champion Ron Capps leading the point standings and the series win total, with six victories thus far. Matt Hagan and his Mopar Express Lane team have claimed three wins and sit second in points, while Jack Beckman has visited the winner’s circle twice with his Infinite Hero Dodge and is third in the standings. Tommy Johnson Jr. has also banked one victory with the Make-A-Wish team and currently holds the fifth points position.

The Mopar brand’s success on the drag strip this season extends to the Top Fuel category as well. Leah Pritchett has emerged as a bona fide star with three wins in her Papa John’s Pizza/Mopar Pennzoil dragster from DSR, while the winningest driver in Top Fuel history, eight-time champion Tony Schumacher, has collected one event win to date this year in the Mopar-powered U.S. Army car out of the DSR stable. Pritchett is currently second in the standings, while Schumacher is fourth.

Mopar-powered Pro Stock driver Allen Johnson has tasted victory often in the Mile High City, including in 2016, and has won the event a total of seven times to claim the most “King of the Mountain” titles alongside Pro Stock legend Bob Glidden. Johnson will be hunting his fifth win in six years at Bandimere Speedway in the Marathon Petroleum Dodge Dart and looking to extend an amazing streak of 10 consecutive final-round appearances at the venue.

The Mopar Mile-High NHRA Nationals will include racing in a variety of Sportsman categories in addition to the popular professional classes. In keeping with NHRA’s “Salute to First Responders” program in 2017, Mopar will honor several of these everyday heroes as Grand Marshals for the event.