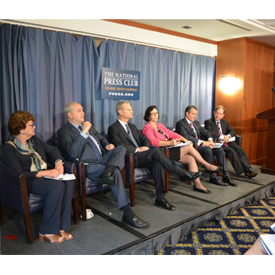 The Motor & Equipment Manufacturers Association (MEMA) on Aug. 9 hosted a policy panel discussion on the upcoming NAFTA renegotiation at the National Press Club in Washington, D.C. The event attracted a sizable crowd, according to the group.

Attendees included members of the American, Canadian and Japanese media; associations and corporations within automotive industry; and representatives from government agencies such as the U.S. Trade Representative, U.S. Environmental Protection Agency, U.S. Department of Commerce, U.S. Department of Transportation, National Transportation Safety Board and the Mexican Embassy.
MEMA, which represents the largest sector of manufacturing jobs in the U.S., has taken a leadership role as legislators and trade experts explore the potential impacts of renegotiating or modernizing NAFTA and implementing other critical trade rule changes, according to the group.

“MEMA has expressed a strong position on NAFTA renegotiations. Motor vehicles suppliers are part of a global industry and are dependent on a world-wide network of suppliers and customers for continued viability and growth,” said Steve Handschuh, MEMA president and CEO. “Events like this in Washington, D.C., provide a platform for MEMA to represent our members and help policy makers understand that that great care needs to be taken in renegotiating or modernizing NAFTA.”