Lingenfelter Performance Engineering will be offer special bonus tickets for SEMA Show attendees next week to participate in the 2015 Corvette Dream Giveaway during the Nov. 3-6 show.

The 2015 Corvette Dream Giveaway encourages entrants to make a tax-deductible donation for a chance to win a pair of special Corvettes. On display in the Continental Tire booth (No. 41117) will be the 2015 Corvette Z06 featuring a Lingenfelter-enhanced LT4 engine and performance engine components, which produce 725 horsepower.

For classic Corvette enthusiasts, the restored 1967 L71 Corvette Sting Ray coupe in Rally Red boasts a 427ci big-block engine, and is one of the most popular and sought-after collectible sports cars today.

Interested SEMA show attendees can make a donation of $20 or more and get 50-percent bonus tickets courtesy of Lingenfelter Performance Engineering, according to the company.

“As an important part of fundraising for these worthy, non-profit organizations, having the support of automotive enthusiasts during SEMA would be a great boost for this program,” said Ken Lingenfelter, owner and CEO of Lingenfelter Performance Engineering.

The contest ends Dec. 30. Representatives from New Beginning Children’s Homes and Lingenfelter will present the keys to the two Corvettes to the lucky winner during a ceremony at the Dream Giveaway Garage in Clearwater, Florida. 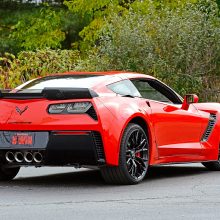