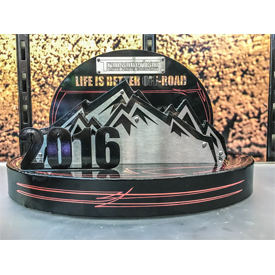 Transamerican Auto Parts announced the panel of expert judges who will be selecting the recipient of the 2017 Life is Better Off-Road SEMA builder award. The group of professionals was chosen to represent a broad spectrum of the off-road industry and are noted as some of the most accomplished names in off-road vehicle engineering, development, fabrication, journalism and off-road motorsports, according to the company.

Now in its third year, the Life is Better Off-Road award is an annual industry prize awarded by Transamerican Auto Parts to the best-presented, truly off-road capable truck, Jeep or SUV on display at the SEMA Show in Las Vegas.

Hosting the award presentation is Los Angeles radio DJ, producer and personality Jay “Lightning” Tilles from the world famous KROQ radio station. As an icon in L.A. radio, Lightning has cultivated a love for trucks, Jeeps and custom vehicles since his childhood. His personal collection of vehicles is a testament to that passion.

The group will be selecting 10 semi-finalists from among previously submitted entries based on such criteria as off-road reliability and capability, real-world functionality, quality of craftsmanship and overall vehicle presentation. From these contenders, one Jeep and one truck or SUV will be chosen as the two finalists vie for the designation of being named the most authentic off-road-capable vehicle at the SEMA Show.

As part of the award package, the winner will receive a cover feature and multi-page vehicle spotlight in ORA Magazine, recognition across the spectrum of Transamerican social media and digital channels, an invitation to be displayed in feature locations at TAP-sponsored events, trade shows and truck and Jeep fests, along with the benefits of extensive partner media coverage of the award. The 10 semi-finalists will also be mentioned in the full media campaign as well as receiving ribbons in recognition of their achievement.