Bill Hines with "The Bat"

Bill Hine’s phenomenal 70-year career as an auto customizer has come to an end. Hines died at the age of 94 on May 20, leaving a significant mark on the aftermarket and a giant void in the shop.

Hines was originally from Erie, Pennsylvania-”born there in 1922-”but frequently moved around the country to work for shops, such as the renowned Barris Kustom Industries in California and the equally famous Alexander Brothers shop in Detroit.

Hines was called “The Leadslinger” because of his talent with old school lead body filler in the days of the customized “lead sled” cars. Later, he picked up the nickname “Godfather of Hydraulics” after he took a liking to hydraulic suspension systems to lower custom cars close to the ground.

Hines, a humble man, was sometimes overshadowed by his collaborators, such as George Barris. But in his later years, Hines began receiving the kudos he had long deserved.

As the traditional hot rod sport grew, the spotlight began to focus on the men who had been pioneers in hot rodding and customizing just before and immediately after World War II. Hines was one of those personalities and started showing up frequently in articles, broadcasts and on social media sites.

Hines, shown in recent magazine articles, appeared as a small man with hunched shoulders, wearing baggy pants held up by suspenders. There was definitely a sense of history about his aging appearance and there was always a “stogie” cigar in his mouth.

Hines’ first custom car was a 1941 Buick convertible. In 1953, he built a car that won the “Best Custom” award at the Detroit Autorama. Hines worked in his last shop right up until he died. Some of his best known custom cars include cars called the Golden Nugget, Lil Bat and Budda Buggy. 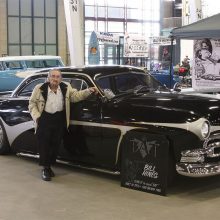