Bobby Alloway of Alloway’s Hot Rod Shop in Louisville, Tennessee, added to his long list of career accolades by recently winning the SEMA Battle of the Builders competition held in Las Vegas. The award, part of the annual SEMA Show, was announced Nov. 6 at the Las Vegas Convention Center.

Alloway took the honors with a 1933 Ford Roadster owned by Larry Olson of Sioux Falls, South Dakota. The car was on display in the PPG booth.

“This is just as great as a Ridler or Great Eight win,” Alloway said. “I almost didn’t enter because I didn’t think I had a chance with an old hot rod; it doesn’t have all the technology that the other builders’ cars had.”

Expert judges Fred Williams (Petersen’s 4Wheel & Off-Road), David Freiburger (Hot Rod) and R.J. de Vera (Meguiar’s) narrowed down a field of more than 200 car builders and customizers, and the 260 custom cars in the Battle of the Builders. The finalists then evaluated each other’s entries and decided amongst themselves who would take Top Builder honors.

Alloway has been building ageless street rods since 1978. He is no stranger to major awards. He’s won the America’s Most Beautiful Roadster (AMBR) award twice, and Best Rod at the Grand National Roadster Show (GNRS). His cars have won the Goodguys’ Street Rod and Street Machine of the Year and the prestigious Ridler trophy, among others. Alloway has also been honored as Detroit Autorama Builder of the Year and inducted into the National Rod & Custom Car Hall of Fame.

“Bobby is a legend in the custom hot rod world, and since developing a relationship with him in 2014, his overall influence and recognition in the sport continues to grow,” said David Borla, vice president of sales and marketing at Borla, a company that regularly partners with Alloway. “We’re thrilled to have him as a part of the Borla family and are very excited to see what he has in store for 2016.” 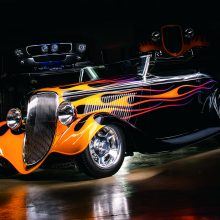