With their vision for one BMW M6 GT3 each, they will join the ranks of outstanding artists like Andy Warhol and Jeff Koons who have participated in the program in the past.

“We are delighted to be working together with two very innovative and influential artists, Cao Fei and John Baldessari, in creating two new BMW Art Cars,” said Harald Krüger, chairman of the board of management of BMW AG. “Jeff Koons did a fantastic job on our last Art Car and we are looking forward to further, compelling pieces. Fei’s all-encompassing curiosity as well as John’s intuitive minimalism will make for great additions to our collection that are second to none.”

Fei’s Art Car #18 will make a world premiere at a major museum and a major race in Asia next year, BMW announced.

“The theme of this century is that we enter ‘a landscape of no man’s land,’ e.g. autonomous cars and aircrafts and virtual reality,” Fei said. “I expect to transcend the current context of cars and to embrace new possible ways of expressions.”

Baldessari’s car #19 is set to make its world premiere at Art Basel in Miami Beach on Nov. 30, and appear at the Daytona International Speedway in January 2017.

“It’s the first time I have ever, in a sense, collaborated. I didn’t design the car-I collaborated with the designers of the car,” he said of his work. “I figured my use of colored dots is kind of an iconic series, so I had to include that.” 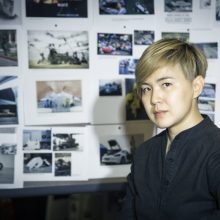