On the verge of making its eighth straight appearance in the big game, Kia Motors has announced plans to debut the brand’s Super Bowl commercial on NiroBot for Messenger on Facebook. It will be live on Wednesday, Feb. 1.

Starring Melissa McCarthy, the ad is the centerpiece of a multi-faceted marketing campaign for the all-new 2017 Niro, which blends crossover style and utility with exceptional fuel economy of up to 50 mpg combined1 for the FE trim, according to the company.

“With its advanced technology and tremendous efficiency, the Niro sets a new standard in the market, and being the first bot for Messenger to debut a Super Bowl ad reinforces the idea that our newest crossover is like nothing consumers have ever seen before,” said Michael Sprague, chief operating officer and EVP, Kia Motors America.

Kia was one of the first automotive manufacturers to utilize the bot platform and has achieved more than half-a-million engagements since the NiroBot was launched in November, the company stated.

Created by David&Goliath, KMA’s advertising agency of record, the ad traces a heroic and harrowing journey stretching from the polar ice caps to an arid desert, and continues to prove why the Niro is “a smarter kind of crossover.”

A key component to Kia Motors’ Green Car Roadmap, the Niro “is a no-compromise choice that combines driving enjoyment with eye-catching design, functional utility and hybrid efficiency, thereby striking the perfect balance for today’s consumers and staking claim to a unique position between the hybrid-electric vehicle and CUV segments,” according to the company.

As part of Kia Motors’ EcoDynamics philosophy, the Niro represents an important next step on the path to nearly tripling the brand’s global green car lineup by 2020. A plug-in hybrid powertrain is due to be added later. 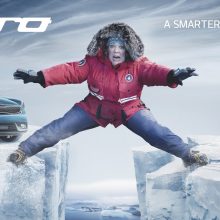