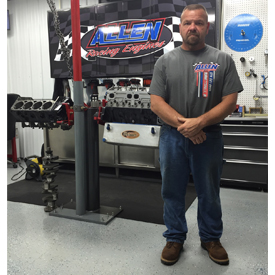 Since 1992, Allen has been working in the racing industry with a specialized focus on engine building in modified race cars.

In 2009, Allen founded Allen Racing Engines, and has been assembling award-winning engines for drivers year after year. Allen has built engines for two of the top five drivers in the nation for the UMP DIRTcar Series for back to back years, competing against an estimated 3,000 other drivers. He has placed in the top five on the engine builders win list consistently on a national level, with numerous track championships on a local level.

Currently, Allen has drivers running his engines in the UMP DIRTcar Series that are winning in the Northern Indiana region, Deep South region and standing fourth in national points for South East Dirt Modified Series.