*See images by clicking below

Hyundai Motor has revealed the first rendering of its new G90 luxury sedan, which is named EQ900 in Korea and debuting next month. Hyundai plans to launch six new Genesis models by 2020.

Majoring on “human-centered” technology, combined with engaging driving dynamics, G90 includes an assortment of safety features and technological advancements to set itself apart in the luxury market, according to Hyundai.

G90 designed appearance is described as “athletic elegance,” by the carmaker. The design derives from Hyundai’s newly-formed Prestige Design Division.

Crowned by the Genesis emblem, the radiator grille combines with “sophisticated” headlamps on the car’s facade. The body’s flow “communicates the car’s dynamic, future-orientated character.” The theme continues to the “long and agile” rear lamp cluster, according to Hyundai. 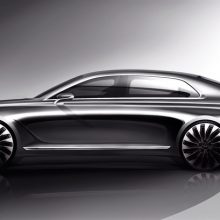 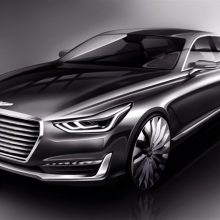