Honda has introduced the 10th-generation Civic Sedan for 2016, slated for sale this fall.

With a more athletic stance and sportier driving position, the 2016 Civic Sedan is a new-from-the-ground-up design intended to recapture the sporty character of Civic, according to Honda.

The Civic Sedan is the first in a series of new 10th-generation Civic models that will include a sedan, coupe, high-performance Si models, a five-door hatchback and the first-ever Civic Type-R model for the U.S. market.

The sporty new Civic design is grounded in its more athletic stance and low and wide proportions. Compared to the current model, the 2016 Civic Sedan is nearly 2-inches wider and 1-inch lower with a 1.2-inch longer wheelbase, featuring a more compact and sporty front overhang, a longer, more aggressively sculpted hood and fastback-style tail.

The taut proportions of the new Civic Sedan are complemented and accentuated by refined design details, including sleek and swept-back bodylines, a sharp and aggressive face and bulging wheel arches, according to Honda. The car is highlighted by LED exterior lighting, including new Honda LED headlights (in-line type), LED daytime running lights (standard) and distinctive C-shaped LED taillights (also standard).

The 2016 Civic will feature two all-new engine, including the first-ever application of Honda turbo engine technology in the U.S.

Civic Sedan LX and EX trims will be powered by a 2.0-liter, 16-valve, DOHC i-VTEC four-cylinder, mated to either a six-speed manual (LX trim) or continuously variable automatic transmission (CVT). Civic Sedans in EX-T, EX-L trims and Touring trims will be powered by a 1.5-liter, direct-injected and turbocharged 16-valve DOHC inline-4, mated to a unique CVT, delivering a new level of responsiveness in this capacity class of turbocharged engine.

The new 1.5-liter powerplant is the first turbocharged engine on a U.S. Honda model and the most powerful engine ever offered on a non-Si Civic in America, according to Honda. Both engines are targeted to receive EPA highway fuel economy ratings in excess of 40 mpg.

The 2016 Civic will set a new standard for dynamic handling, steering, ride quality and cabin quietness in the compact class, courtesy of its all new platform, featuring the most rigid and tightly sealed body and the most sophisticated chassis in Civic history, according to Honda.

Advancing the sporty character of this all-new Civic is its more sporty driving position, with a 1-inch lower hip point compared to the current car. The lower hip point is enabled by the new Civic’s lower floor and engine and its all-new suspension design. The new Civic chassis features a redesigned strut front suspension and a new multi-link rear suspension mounted to an ultra-rigid rear subframe.

Torsional rigidity of the new body is improved by 25 percent, aided in part by more intensive use of ultra-high-strength steel, according to Honda. Twelve percent of the unit body is made of ultra-high-strength steel, up from 1 percent on the current model. Aerodynamic efficiency is improved by 12 percent to class-leading levels, in part through the use of full underbody covers-a Civic first. Despite its larger size, the new Civic unit body is 68 pounds lighter than before, while new body-sealing techniques result in a 58-percent reduction in cabin air leaks.

An additional 3.7 cubic feet of interior space provides 2-inches of added rear-seat legroom versus the outgoing model. In front, new ultra-thin front roof pillars enable class-leading forward visibility; and at the rear, trunk space has been increased by 2.6 cubic feet with a lower liftover height, larger opening and wider and taller cargo area. Civic Sedan EX and above trims will feature a 60/40 split and folding rear seat.

Apple CarPlay and Android Auto are both offered.

The 2016 Civic Sedan will be available with the Honda Sensing suite of safety and driver-assistive technologies, including Collision Mitigation Braking, Road Departure Mitigation and, for the first time in a Honda, Adaptive Cruise Control with Low-Speed Follow. 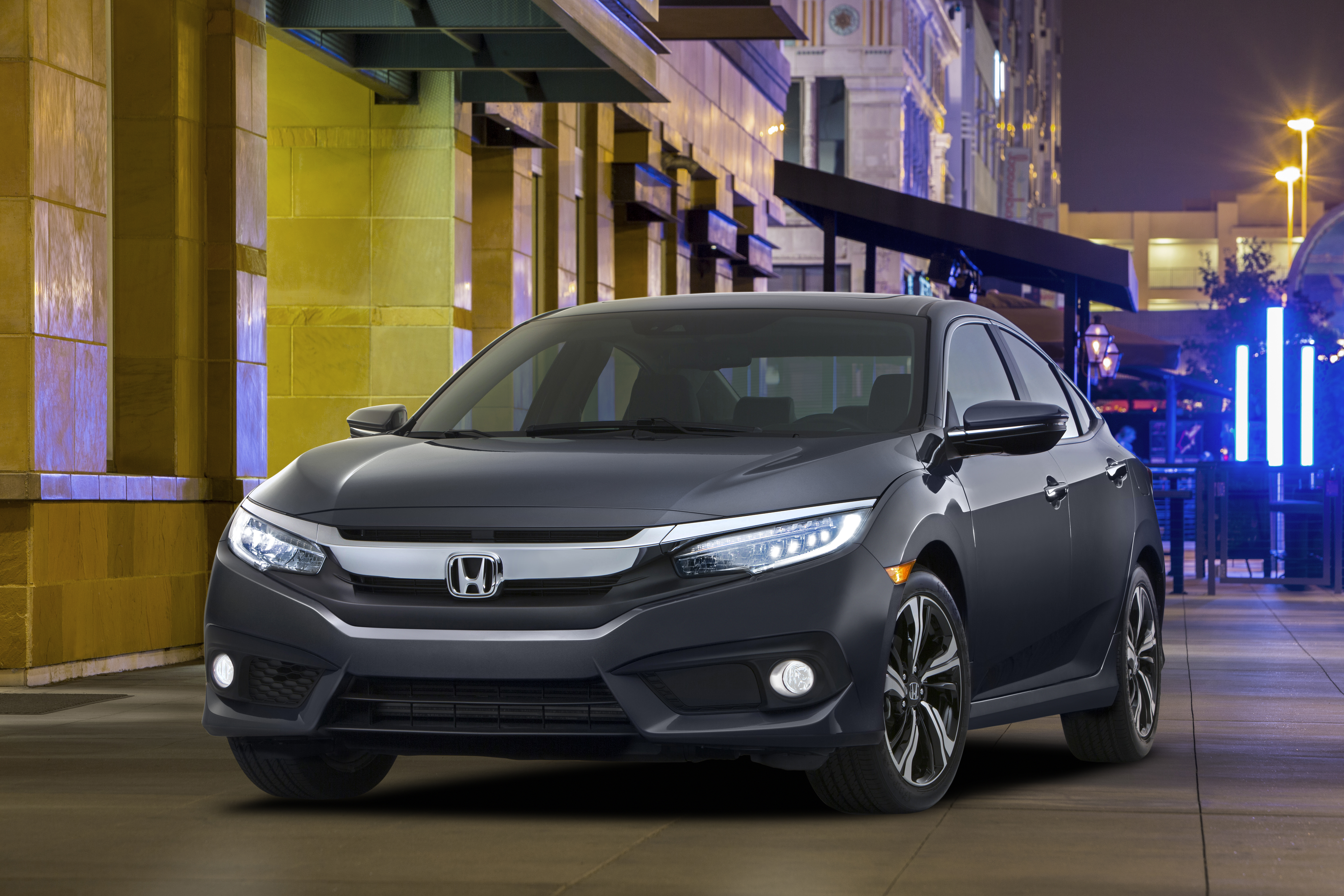 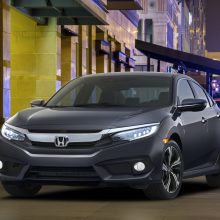 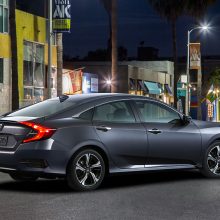 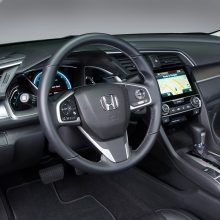 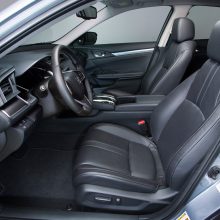 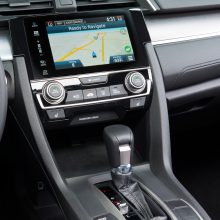