Fresh on the heels of its global introduction at the Geneva Motor Show, the Honda Civic Hatchback Prototype will make its U.S. debut in New York on March 22, just ahead of the 2016 New York International Auto Show.

Additional details about the Civic Hatchback Prototype will be revealed later this month. 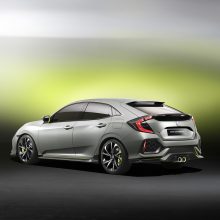