Preston Folkestad of GC Cooling is entering the SEMA Show Battle of the Builders Competition in the Young Gun category. To qualify as a Young Gun, builders must be 27 years old or younger by the final night of the SEMA Show on Nov. 3.

Folkestad, 22, is a graduate of Iowa State University. He is the son of Bob Folkestad, an engineer and sales professional in the aftermarket industry and owner of Creative Werks Inc., the distributor of GC Cooling.

Growing up in an automotive-centered family, he developed a passion for anything with a motor early on in life.  He learned to ride a motorcycle at 3 years old despite not knowing how to ride a bicycle without training wheels until about a year later. Folkestad later learned how to drive for the first time at the Bonneville Salt Flats while his father set land speed records in a Ford Ranger dubbed The Rocket Ranger.

In June of 2017, Folkestad embarked on rebuilding the 1973 Chevrolet C10 he inherited from his great-grandfather, Maurice “Buck” Heckart. The C10, named Buck the Truck in memory of Preston’s great-grandfather, was purchased new by Buck in 1973. A World War II veteran who served in the 707 Tank division and was a motorcycle messenger and medic, Buck was a major influence in Folkestad’s life. Folkestad drove the C10 as his personal use vehicle through high school as well as during his years at Iowa State.

When driving the truck in high school, Folkestad and his dad cut the truck’s frame to transform it from a long box C10 to a short box. The pair added a small block engine and painted it flat black.

For the SEMA Show, however, Folkestad knew he needed to create a masterpiece with the C10 in order to enter the truck into the Young Gun competition while honoring Buck’s memory. To do this, he decided to rebuild the truck as a street-ready, track day capable vehicle.

“I really want to honor my great-grandpa and make my dad proud. My dad would be pretty happy if I placed well,” Folkestad said. “This is my first SEMA Show, and I’ve been looking at some of the great builds already entered in the Young Guns portion of the competition. I hope Buck the Truck can make it into the top 10.”

Folkestad spent over 80 hours of the redesign correcting gaps and fitting the doors and fenders. Rust spots were fixed and rockers, cab corners and cab supports were replaced. The whole truck was skim coated with filler and blocked six times. The exterior was completed with a custom paint job by Chris Cope, using paint from House of Kolors. The C10 has a Kandy Orange color over an Orion Silver base. It is two-toned and has an airbrushed carbon fiber pinstriped graphic.

The modified short bed C10 was designed to be aggressive and race ready. To lower the C10 an additional 2 inches with a notched frame, Folkestad used a RideTech Sreet Grip rear suspension. Other additions include a No Limit Engineering front crossmember with tubular control arms, RideTech coil over shocks, a No Limit Engineering sway bar, and a power rack and pinion steering setup.

Folkestad also used Wilwood six-piston brakes with 14-inch calipers on the front while four-piston brakes are used on the rear. Wilwood also supplied the master cylinder. The transmission is a 700R4 transmission with a B&M 2600 RPM stall converter built by Ed Slivka.

Folkestad took the time to personally design the interior of the truck. From custom door panels, a hand-sculpted bench seat, an Alpine stereo system and more customizations, no part of the truck was overlooked. Vintage Air performance air conditioning and Dakota Digital Instruments were also added to the interior for a modern touch. 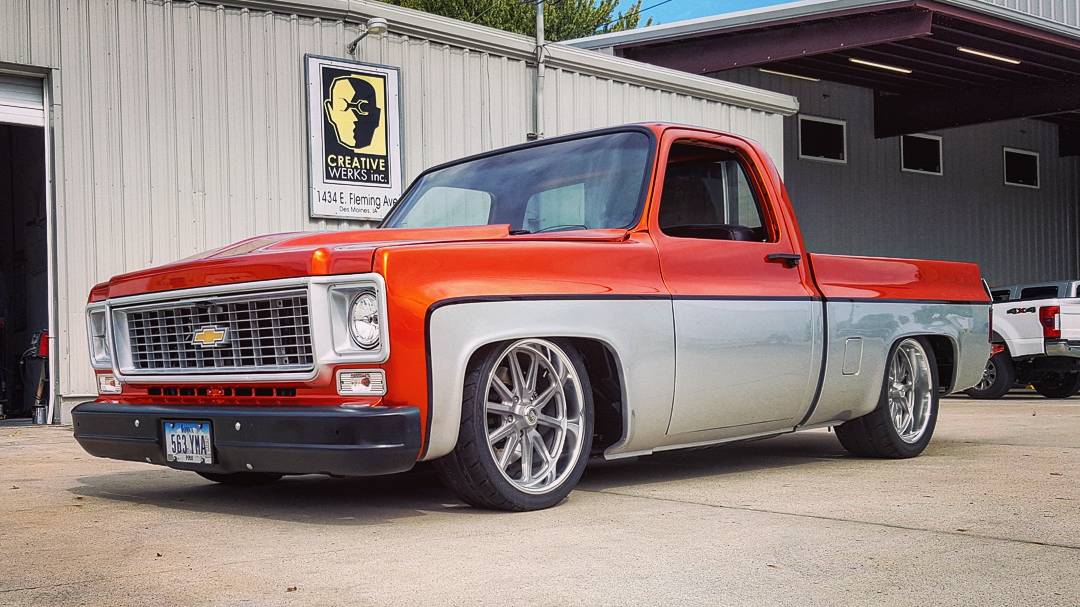 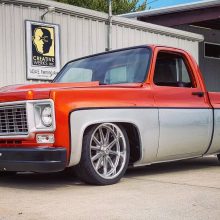