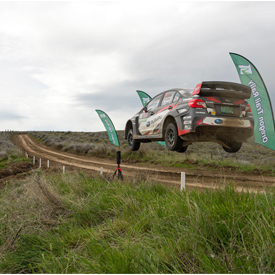 “Disc Brakes Australia has always been popular in the Subaru community for building great brake rotors. But we really wanted to show the capabilities of our rotors in the most demanding motorsport we could think of,” said Yoni Kellman, sales and marketing manager for DBA USA. “Stage Rally can make or break you, and we wanted to prove we had the mettle. Subaru Rally Team USA is the premier team in the sport, so it was only fitting that we teamed up with them to gain valuable feedback on how our rotors hold up at the top levels of motorsports to further improve our products.”

Vermont SportsCar began working with DBA USA earlier this season to develop and test brake rotors for the team’s stage rally cars. The DBA USA rotors were first utilized at the Oregon Trail Rally last month, where SRTUSA took a one-two finish, with Pastrana edging out Higgins by just 10.5 seconds.