The 1925 Chrysler B70 was sought by the exhibit to commemorate the recent 90th anniversary of FCA Canada (formerly, the Chrysler Corp. of Canada), which was incorporated in Windsor on June 17, 1925, just 11 days after Walter P. Chrysler founded the Chrysler Corp. in Detroit.

“This is the car that launched the Chrysler Corp. Designed by three talented engineers, it was the first model to bear the ‘Chrysler’ name and made its public debut at the 1924 New York Automobile Show,” said Brandt Rosenbusch, manager of historical vehicles for FCA US. “The new Chrysler boasted a high-compression six-cylinder engine and Lockheed four-wheel hydraulic brakes-advanced engineering features unprecedented in a car in its mid-level price class.”

Meanwhile, in the North Building at CIAS, FCA Canada displayed a 1984 Dodge Caravan as a special tribute to the company’s 30 years of “minivan leadership,” according to the automaker.

“Chrysler Corp. introduced an entirely new vehicle segment in 1984 that revolutionized the automotive industry,” Rosenbusch said. “The ‘minivan,’ a unibody, front-wheel-drive compact van that easily fit into a garage and provided easy entry and exit for passengers and their packages, was an instant hit. This 1984 model is one of the first examples of the original ‘magic wagon,’ built in Windsor, Ontario, just as our minivans are today.”

Priced at $7,972 (U.S.) when new, this Dodge Caravan is powered by a 2.2-litre engine, produces 96 horsepower and wears wood paneling along its flanks.

Today, FCA still calls Windsor, Ontario, the home of its minivans. To date, more than 14.3 million have been sold globally. Since its debut over 30 years ago, FCA minivans have led their segment in sales in Canada and have introduced 115 segment-first innovations, including 37 on the all-new 2017 Chrysler Pacifica minivan. 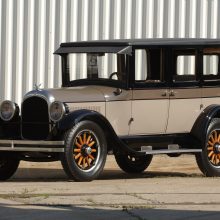 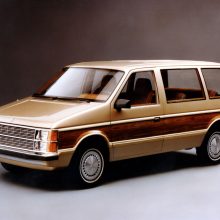