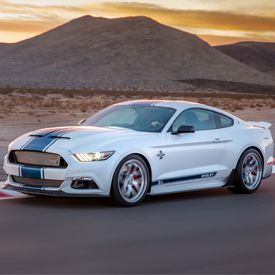 Champion Oil will display a limited edition 50th anniversary Shelby Super Snake Mustang GT at the Oct. 31 to Nov. 3 SEMA Show in Las Vegas. The company will showcase the car in its booth, No. 24423, in Central Hall of the Las Vegas Convention Center.

Five decades after the first Super Snake rumbled out of the factory, Shelby American Inc. is commemorating the anniversary of the legendary Shelby Super Snake Mustang.

“When Carroll Shelby introduced the Super Snake version of the Ford Mustang in 1967, it earned universal respect for its astonishing capabilities,” said Joe Conway, co-CEO of Carroll Shelby International and CEO of Shelby American. “When Shelby American reintroduced the Super Snake in 2007, the world was awed by the 600-plus horsepower street legal muscle car.”

The new Shelby Super Snake marks a significant next chapter in the company’s history. “We compared the groundbreaking 1967 and 2007 model Super Snakes to other cars of their era when setting the performance parameters for our anniversary model,” said Gary Patterson, Shelby American president. “The new Shelby Super Snake matches those cars’ competitive advantages. The newest Super Snake is both extraordinarily fast and a thrill to drive. In a world filled with sterile cars, it’s a throwback to a time when people enjoyed driving.”