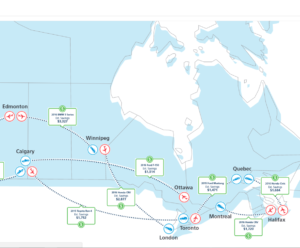 While most Canadian used car shoppers search within their local area, adventurous deal-seekers could scoop up big savings by thinking outside their postal code.

New research from the CarGurus car shopping website shows that there are opportunities for Canadians to save significantly by planning a fly to buy car shopping getaway.

Company analysts say that prices on comparable used cars can vary significantly city to city, so it is possible to fly to another city, buy a used car at a much lower price, drive it home and still save substantially after travel costs.

For example, CarGurus data shows that a car shopper living in Vancouver could save more than $4,000 on a 2016 Ford F-150 if they fly to buy the truck in Calgary-including the cost to fly to Calgary and the cost of gas for the ride home.

In another example, a shopper living in Edmonton could save more than $3,000 on a 2016 BMW 3 Series by flying to buy the car in Winnipeg.

To find the optimal fly to buy cars and destinations, CarGurus analysts studied the company’s Canadian used car inventory, evaluating local market prices on comparable vehicles to identify the most significant regional price differences. They also factored the average cost of both a plane ticket and the gasoline needed for the ride home.

“Canadian car shoppers often cross province lines to buy a car, but expanding their search area to even greater distances can offer the adventurous deal-seeker even bigger savings-with the added bonus of a fun summer road trip,” said Lisa Rosenberg, data analyst at CarGurus. “While staying local makes sense for many car shoppers, this research highlights just how much variability exists with used car prices. Shopping for cars even in nearby cities can unearth opportunities to save.”

Vehicles selected were among the most searched on CarGurus:

CarGurus compared the Instant Market Value (IMV) data of the company’s inventory of used cars for sale in Canada’s largest metro areas. Analysts determined the IMV in each metro area for popular used cars and then compared prices for comparable vehicles between metro areas to identify estimated savings.

Calculated fly to buy savings include the cost of airfare between cities based on TripAdvisor listings for least expensive nonstop (when available) flights for Aug. 1, 2017.

A fly to buy map can be found here.