A new TV episode SEMA: Battle of the Builders will premiere on the Velocity Channel on Jan. 2.

Since 2015, the one-hour program has aired on the network to give viewers a behind-the-scenes look at the SEMA Show, up-close footage of the vehicles and exclusive interviews with builders as they share their personal stories.

In addition to all the customized cars and trucks entered into SEMA Battle of the Builders, the program features an array of vehicle customizers as they reveal the excitement, struggles and journey leading up to the competition. New this year is the expansion of the Young Guns recognition, which shines the light on young, up-and-coming builders in the automotive industry.

Automotive YouTubers Michael Nguyen (Smurfinwrx) and David Patterson (Thatdudeinblue) serve as Young Guns judges, joining returning judges RJ DeVera of Meguiar’s, David Freiburger from The Enthusiast Network and Fred Williams from Petersen’s 4-Wheel & Off Road. Together, they narrow the nearly 300 applications down until the final winner is announced. 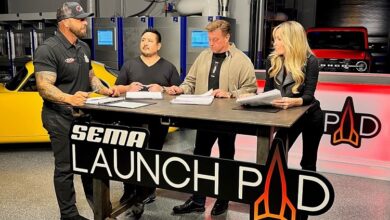