Judges Bobby Alloway, Pete Chapouris and Bob Millard chose 25 cars from the three-day Barrett-Jackson “Show-N-Shine” in downtown Reno. The vehicles were displayed in the Reno-Sparks Convention Center on Saturday before the top five finalists advanced to a ceremony on the Barrett-Jackson Auction block.

This year, with the most competition entries in the Cup’s history, the Wilcox’s were awarded the Barrett-Jackson Cup in front of a TV audience during live auction coverage on Velocity.

The Barrett-Jackson Las Vegas auction is set for Sept. 24-26 at the Mandalay Bay Event Center. Coverage of the auction will be broadcast on Velocity and Discovery. 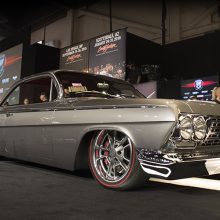