In an advanced taste of the production version, Audi debuted the electric-powered e-tron quattro concept at the International Motor Show (IAA) in Frankfurt, Germany. The car has an electric battery range of 310 miles, according to the company.

The Audi e-tron quattro concept uses the power of three electric motors: One electric motor drives the front axle, the two others act on the rear axle. Total output is 320 kW. The driver can even mobilize 370 kW and over 590.0 lb-ft)of torque temporarily while boosting. The concept study thus performs like a sports car, according to Audi.

When the driver floors the right pedal, the Audi e-tron quattro concept sprints from a standstill to 62 MPH in 4.6 seconds and quickly reaches top speed of 130.5 MPH.

The large lithium-ion battery is integrated into the floor of the passenger compartment. It gives the Audi e-tron quattro concept a balanced axle load distribution and a low center of gravity.

The five-door concept is 16-feet long, 6.3-feet wide and just 5.1-feet high. The coupe-like silhouette has a flat roof that tapers strongly toward the rear. The car’s drag coefficient measures just 0.25, a new best for the SUV segment, where figures are usually considerably over 0.30, according to Audi.

The Audi e-tron quattro concept enables a spacious interior for four and 21.7 cubic-feet of cargo space. The interior has a light and open feel to it and the displays use OLED technology, according to Audi.

The new Audi virtual cockpit curved OLED is a further development of the Audi virtual cockpit that debuted in production vehicles in 2014. To the left and right below the fully-digital instrument cluster are two touch displays with black glass and a subtle aluminum frame. The driver controls the lights and the systems for piloted driving with the left display. The large display on the right is for media and navigation management. The steering wheel serves as an alternate control level. Its spokes are equipped with contoured touch surfaces.

Below the selector lever on the center tunnel console are two more OLED displays for the drive system status, climate control and freely programmable information functions. The curved displays in the front section of the doors serve as digital exterior mirrors. 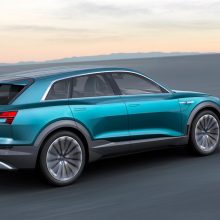 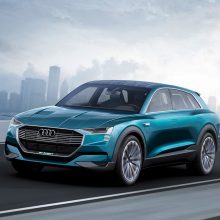 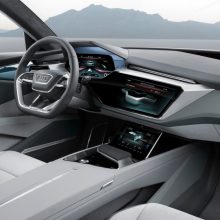