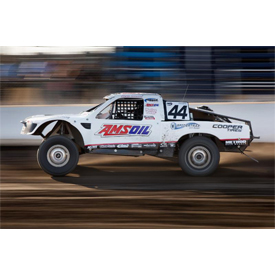 Wisconsin-based AMSOIL returns as TORC’s presenting sponsor for 2017. The 13-round racing season marks the ninth year that the synthetic lubricants brand has backed TORC: The Off-Road Championship.

“Since 2009, TORC has been a great way for AMSOIL to connect with off-road fans. The series reaches the core off-road audience-the hands-on people that run the entire gambit of AMSOIL products,” said AMSOIL’s Erica Danielski. “Whether it’s in a spectator’s off-road motorcycle, truck, UTV or ATV-AMSOIL’s full line of synthetic lubricants is authentically presented to consumers at each TORC event. We use these extreme conditions to test our products and ensure they are engineered to offer customers peak protection and performance. We look forward to another great season of racing.”

In addition to their long history with the TORC Series, AMSOIL’s generous sponsorship of drivers runs from the privateer Sportsman class all the way up to the premier PRO 4 class. The involvement has endeared the company to legions of off-road fans across the nation, while putting the brand out front of all the other lubricant companies, according to AMSOIL.

“We look forward to having AMSOIL as the presenting sponsor this year, teaming up on all the great activations throughout the season,” said Ben Nelson TORC series director.

Next up for TORC: The Off-Road Championship presented by AMSOIL is the Twin Cities Takedown, June 10-11, at ERX Motor Park in Elk River, Minnesota.