The 2016 Toyota Land Cruiser includes a number of new exterior and interior design features, as well as several new safety technology features, a major drivetrain upgrade and enhanced multimedia features, according to Toyota.

The Land Cruiser shows a new signature from behind thanks to new taillights with light-tube design and LED brake lights, a new full-width chrome molding and a new bumper. A chrome body side molding embossed with the Land Cruiser logo and new-design 18-inch alloy wheels accentuate the Land Cruiser’s muscular profile, according to Toyota.

New semi-aniline perforated leather is available in the customer’s choice of black or new Terra (brown). The black and Terra interiors are accented by Deep Wood trim. The high-quality materials complement a center console redesign that shows a more cohesive appearance and more intuitive controls, according to Toyota.

The 2016 Land Cruiser comes in one version: fully equipped and with seating for eight. There are no factory options.

The Land Cruiser’s Entune head unit is upgraded, adding Siri Eyes Free mode and other performance enhancements. When paired with an iPhone, the driver simply pushes a steering wheel button and then speaks requests to Siri. Also, Qi wireless phone charging for compatible devices means one less cable to carry.

In addition, the 2016 Land Cruiser can help the driver avoid hazards with the new Blind Spot Monitor and Rear Cross Traffic Alert. All the new driver-assist systems come standard. A backup camera is also standard, and also useful for hitching a trailer.

The 381 horsepower 5.7-liter DOHC V8 engine features Variable Valve Timing with intelligence (VVT-i) and produces 401 lb.-ft. of torque at 3,600 rpm. Equally critical is that the engine produces 90-percent of peak torque at just 2,200 rpm, giving Land Cruiser a powerful response for any driving situation and making it especially useful for towing, according to Toyota.

For 2016, a new eight-speed automatic transmission replaces the six-speed unit, with the added ratios allowing a wider ratio spread to help enhance acceleration and fuel efficiency. When the going gets rough, the driver can select manual control for more powertrain control. EPA fuel efficiency is 13 mpg in the city, 18 mpg on the highway and 15 combined.

The standard trailer towing package equips the Land Cruiser to pull a trailer up to 8,500 pounds. The hardware needed for towing is all there, including an engine oil cooler, as well as a connector and sub-wiring harness that facilitate a trailer-brake controller. Trailer sway control uses the Vehicle Stability Control (VSC) to help counteract trailer sway, helping to make towing a more relaxed proposition. 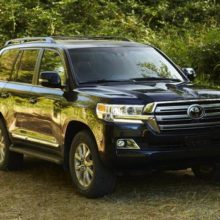 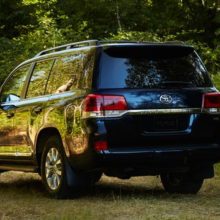 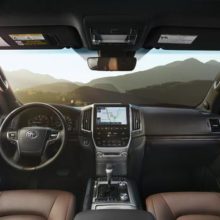 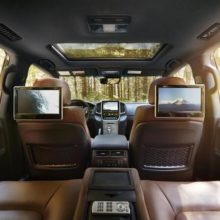 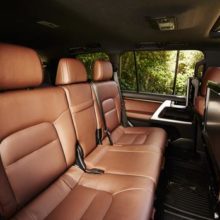 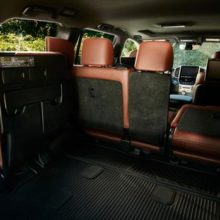 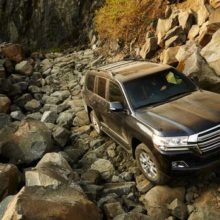 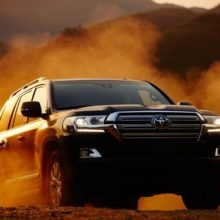