Honda recently introduced the 2016 Accord, loaded with advanced technology, in Silicon Valley, the first time the company has launched a new vehicle in the U.S. tech hub.

Coming to market this month, the 2016 Accord will be the first Honda model and among the first high-volume cars in the marketplace to feature both Apple CarPlay and Android Auto. These and other major upgrades to technology and features make it the most high-tech Accord ever, according to Honda.

The 2016 Accord sedan and coupe received a dynamic new styling, a new display audio touchscreen interface, and Honda Sensing, a comprehensive suite of safety and driver-assistive technologies. The 2016 Accord also adds HD Radio, heated rear seats, front and rear parking sensors, and a number of other new features and technology to be revealed in coming weeks. Details on the Accord Hybrid will be announced at a later date.

Exterior and Interior design
The 2016 Accord gets a major facelift with sportier, more sophisticated styling, front and rear, according to Honda. In front is a more sharply creased and intricately structured bumper fascia with outside edges that tuck into intake-like meshed areas that house new LED fog lights. A new aluminum hood features sharper character lines that meet up with a brighter, more expressive front grille. In the rear, the Accord gets restyled LED taillights and a similarly aggressive rear bumper fascia redesign.

While all models feature restyled wheels, the Accord Sedan (Sport and Touring trim) and Coupe (Touring, new for Coupe) get new, larger 19-inch wheels and tires. The Touring sedan also gets a new rear deck spoiler. All models, Coupe and Sedan, feature the expanded use of LED lighting-LED taillights for all models, LED headlights for the new Touring Coupe, and LED daytime running lights (DRLs) for Sport and above trims.

Honda Sensing
All 2016 Accords also can now be equipped with Honda Sensing, among the most comprehensive suite of advanced safety and driver-assistive technologies in the class. Honda Sensing includes a collision mitigation braking system (CMBS) with forward collision warning (FCW), lane keeping assist (LKAS), road departure mitigation (RDM) with lane departure warning (LDW) and adaptive cruise control (ACC), and is available as a standalone option on all trims with the exception of Touring, where Honda Sensing is included as standard equipment.

Also, all 2016 Accords feature a standard multi-angle rearview camera and expanded view driver’s mirror and, for the first time, new auto high-beam headlights (Touring trim) that enhance nighttime visibility and driving convenience by defaulting to the high-beam setting and automatically switching to low beams when an oncoming vehicle is detected.

Display Audio with Apple CarPlay and Android Auto
The Accord audio and digital experience also includes a 7-inch display audio touchscreen interface featuring Apple CarPlay and Android Auto, on EX and above trims, as well as available HondaLink Assist (e911) and HD Radio. The touchscreen lets users swipe, tap and pinch-just like on a tablet or smartphone-to control the vehicle’s audio system, display settings and other advanced features.

Upgraded Features
Accord EX and above trims (sedan and coupe) include automatic transmission and remote engine start. SiriusXM satellite radio and Homelink remote, previously on EX-L and Touring, are now standard on EX and above trims. Sport and above trims in the sedan lineup also get a new 60/40 split and folding rear seat, previously a one-piece folding design. The Accord Sedan in Touring trim gets heated rear seats, front and rear parking sensors and new rain-sensing windshield wipers.

Advanced Powertrains
The Accord will continue to be offered with two advanced Honda engines: a direct-injected (DI) 2.4-liter inline i-VTEC 4-cylinder and a 3.5-liter VTEC V-6 that is the most powerful engine offered in a Honda sedan to date. Available transmissions include a sporty and fuel-efficient continuously variable transmission (CVT) for the four-cylinder engines, unique six-speed manuals for the four-cylinder and V-6 engines, and a six-speed automatic for V-6 models. 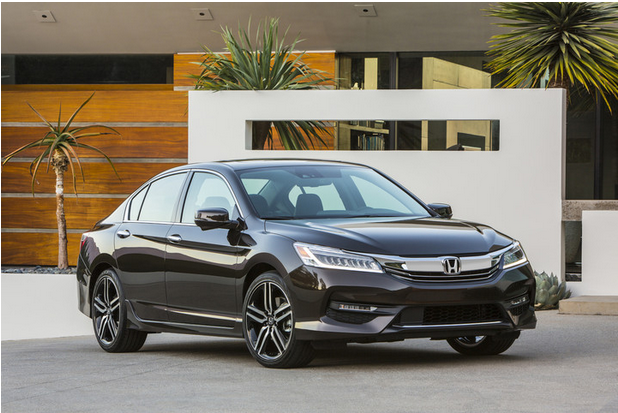 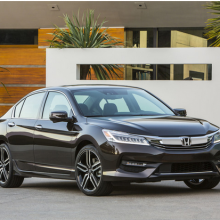 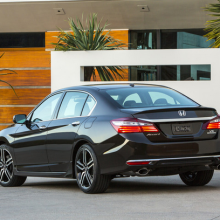 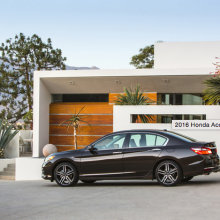