The newly-restored and freshly waxed 1901 Four-Wheel Duryea Phaeton is grounded in history, having been technologically advanced for its day with a 10 horsepower, a three-cylinder water-cooled engine, pneumatic tires and an inclined king pin.

Meguiar bought the car in 2012 at an RM Sotheby’s auction in Phoenix. He sent the car to USA World Classics in Vallejo, California for a complete ground up restoration that took two years.

“It was long on my bucket list to have a 1901 car in my collection to commemorate the year my granddad started Meguiar’s,” said Barry Meguiar. “It is an honor to be invited to display the car on the lawn at the Pebble Beach Concours d’Elegance and I think he would be proud to see it celebrated.”

Meguiar’s has long been the official car wax of the Pebble Beach Concours d’Elegance and sponsors the Preservation Award. 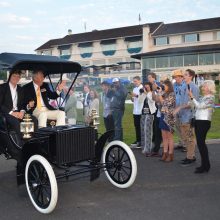