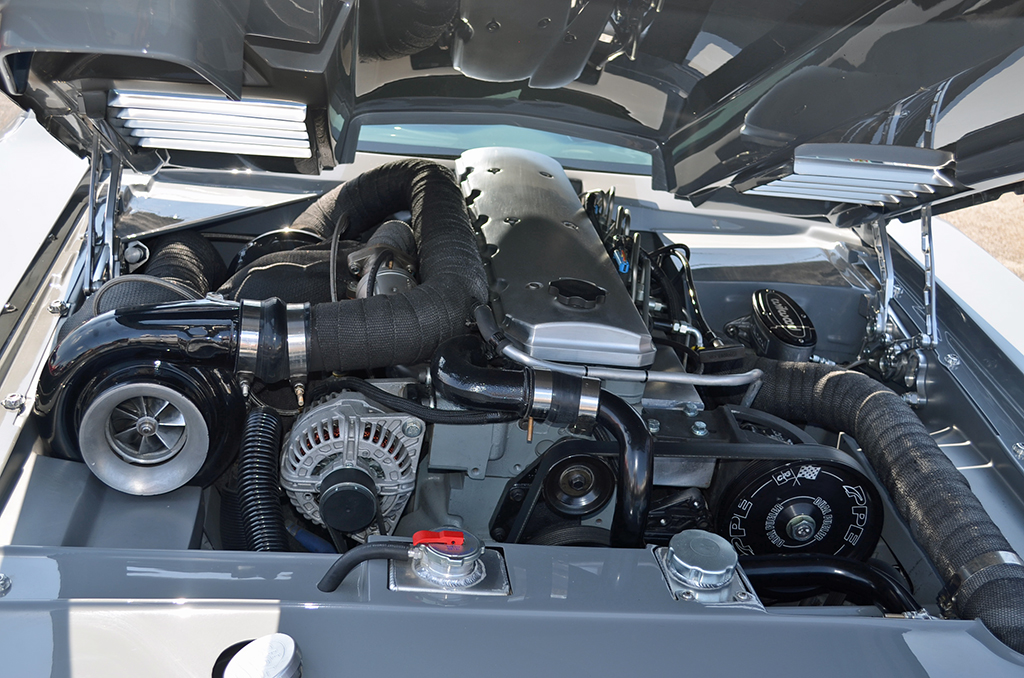 The custom 1970 Barracuda in the Pilot Transport booth at the HOT ROD Power Tour is a testament to the heights of shop marketing. The all-steel, twin-turbo 6.7 Cummins Diesel vehicle generates 1,500 horsepower, as well as a year’s worth of high-visibility marketing for Weaver Customs, a shop situated near Salt Lake City in West Jordan, Utah.

“We mostly do simpler builds-”everything from hot rods to some more over-the-top stuff,” said Randy Weaver, who owns the shop with his wife Sydney Weaver.

Once per year, Randy zeroes in on one “crazy” project-”something that pushes the limits of his creativity. That car this year is the custom-gray 1970 Cuda, named torc. The car took hundreds of thousands of dollars to build and 10 months of work. It debuted to the public Feb. 26-28 at Detroit Autorama at the Cobo Center in Detroit and will be shown at the SEMA Show later this year.

The Cuda, owned by Sydney Weaver’s dad, Len Elfervig, will go to every show the shop attends this year. While Weaver Customs also uses social media to get the word out on its services, it’s really the shop’s special project every year that generates the most business, Randy said. It also makes him a better professional.

“When it comes to something like this, I really have to think hard of how I can make everything work,” Randy said. “It pushes my limits and challenges me.”

Performance highlights of the Cuda include the 48RE fully manual transmission with TH 400 Output Shaft conversion. The engine is boosted by an S366 turbo feeding an S460 turbo. Color-matched nitrous oxide tanks live behind the driver and passenger seats.

The body includes several notable customizations, most notably the “crazy center-outlet exhaust,” jutting through the center of the car’s trunk. The roof was channeled and chopped in order to lean the flush-mounted windshield back and move the rear window to an upright angle.

“It has a killer profile. It looks like it’s going 150 mph when it’s standing still,” Randy said.

The custom Axalta paint mix used on the Cuda was appreciated enough by Axalta to be made an official color, now available as Torque Gray, according to Weaver Customs.

The front and rear bumpers of the Cuda were fabricated and restyled with rocker treatments. The rear bumper came from a 1969 Camaro and was fabricated to enhance the aesthetic of the exhaust pipe.

Randy also built a custom dash for the Cuda, which utilizes Dakota Digital gauges. An Alpine Electronics deck is mounted near the arm rest.

“I wanted a cockpit theme,” Randy said. “I made it so everything in there is facing you, so you feel like you’re at the center of central command.”

The Cuda was designed with help from Pfaff Designs, based in Detroit.

Randy already has an idea of next year’s crazy project.

“I’m planning on doing a 1941 Dodge Power Wagon-”military issue-”and doing an armed forces theme. I think I already picked out the name: Full Metal Jacket,” he said. “I’ve always loved and respected what veterans do and wanted to do something to honor that. My father-in -aw flew planes in the Air Force.”

The June 12-17 Hot Rod Power Tour greeted crowds and thousands of hot rod-toting locals in Louisiana, Texas, Oklahoma and Texas. Stay tuned to THE SHOP eNewsletter for more reports from the show.