John “Gunner” Gunnell has been writing about collector cars and trucks since 1972 and opened his shop, Gunner’s Great Garage, in 2010.

As a shop owner, I was interested in how participants in the restyling and truck accessories side of the aisle were going to react to a new name-THE SHOP SHOW-and other changes made to the former Hot Rod & Restoration and The Restyling & Truck Accessories trade shows.

Early reactions from exhibitors manning the 200 booths at the March 13-14 trade show inside the giant Indiana Convention Center were very upbeat.

“Obviously we have a pretty big crowd for the demos that our trainer Albert will be doing constantly today and Saturday,” said Melissa Cox of Hexis, a French company that manufactures color-change vinyl films and digitally printed films. “The show is awesome. We are here with North Light color-a distributor of ours-because we sell products, training and general knowledge about vinyl wraps,” Cox said.

The show kicked off Friday with the first three of 24 exhibitor training sessions. A streamlined registration system helped to build the crowd of potential customers waiting for the 10 a.m. opening of the show, which filled not one, but two exhibit halls. Trucks, Jeeps, hot rods and muscle cars were displayed for 250-300 early attendees to inspect before the drapes opened up.

We’re busy at our small restoration shop but we consider the annual eight- to nine-hour trek to Indianapolis essential.

After one previous visit to the show, we signed up to become dealers for Steele Rubber Products and we like the way they’re expanding into universal-fit products that work whether we’re doing a factory style restoration or a bit of custom fabrication. On other occasions, the show introduced us to new restoration aids such as the Clamp-Tite tool and the Malco line of cutting tools.

This year, we wanted to learn about new products and new ideas and explore the possibility of offering restyling services and selling truck accessories in an old-car/hot rod shop. We haven’t decided to do it yet, but both these niches seem hot and it’s tempting because pickups are so big in our area..

Being from Wisconsin, it is always nice to look up vendors from our home state to renew old acquaintances and make new ones.  We missed seeing Tim Williams of PendaForm this year, but we’re looking forward to visiting Pop & Lock headquarters in Green Bay to see if the company’s tailgate security products might be a good fit in our shop if we decide to move into the truck accessories niche.

Being relatively new to a brick-and-mortar business (we opened the shop in 2010), the show is educational to us in several ways. First, we are learning about the difference between suppliers, reselers and distributors. Educational sessions such as the Business Roundtable teach us how to be better businessmen, while other Training By Exhibitor presentations help increase our craftsmamship.

Last, but not least, THE SHOP SHOW presented show vehicles to inspect for both new builder ideas and as a references for work we’re doing back home. In our shop right now is the 65th Triumph TR250 made, while a green TR250 that Adam King of Classic Kings Automotive brought to show for a customer was the 6,465th one made. TR250s were sold just one year and only 18,600 were built. Being able to photograph details of a TR250 was a treat for us.

Worth The Long Flight

Alan Clark, owner of Revtek Suspension LLC, came all the way from Portland, Ore., and said THE SHOP SHOW was “already worth the trip” when we spoke to him. “The new focus is good because they’ve got a better variety of products here, better support and lots of lines of vendors,” Clark noted. “Because not everyone is into the trucks and SUVs that use our lift kits and leveling kits, we can work on educating new customers and the mix is better for us.”

Michael McLaughlin of UnderCover Inc, said that his company-the maker of a one-piece tonneau cover made of ABS material-has been going to Indianapolis for the show for the last several years.

“We feel it’s a worthwhile exposure of products to people we don’t see at SEMA and some other shows,” McLaughlin said.

“Well worth the 13-hour drive,” is how Jim Stuart of Enid, Okla., summed up THE SHOP SHOW. He didn’t drive his mom’s old 1972 right-hand-drive postal van that he customized after she retired. The “zippy” little sliding-door truck (pictured below) was built in Stuart’s Stone Cold Customs shop. It was being used to promote Scorpion Coatings’ color-matched products, which were used on the bottom of the Jeep’s hood, its interior and the underside.

“The show has been great and we’re getting a good response to how we used the spray-in bed liner material and sound deadener to make this hot rod ‘Zip Van’ a little different,” said Stuart.

“It’s a great show, really fantastic,” said Paul Mueller of Air Lift. “It brings together a real diverse group of auto guys and has a little bit of everything, whether it’s for restylers, restorers or truck guys.”

Mueller explained that his products “appeal to everyone at this show because they all have trailers, whether they’re transporting a Jeep, a classic or a racing car.”

PendaForm Corp. of Portage, Wis., launched its new “Tailgate Pong” tailgate cover at a Friday night Tailgate Party and many people played the game. Those who attended the party were eligible to win various prizes from PendaForm, including gift cards, a tailgate party in their home town, and the actual Tailgate Pong liner.

“A great crowd came in Friday morning, too” said Tony Casper, national sales manager of PendaForm. “We got a big response to Tailgate Pong.”

PendaForm marketing director Mike Freye added, “The show also works for us because Meyers Distribution is here and they’re such a good customer of ours on the distributor side.”

The visitor count on Friday afternoon fell from the crowd seen in the morning, but Saturday morning the number of people waiting to get in seemed to have grown slightly larger than the first day. There were also many new faces-a sign that a growing economy is keeping shops so busy that it’s harder to take a day off during the workweek. 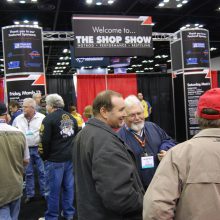 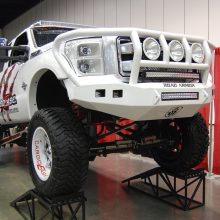 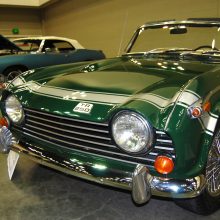 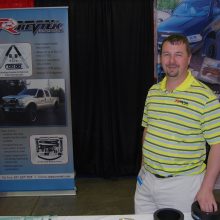 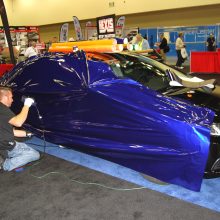 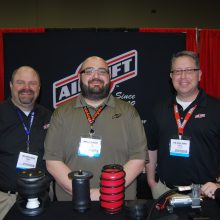 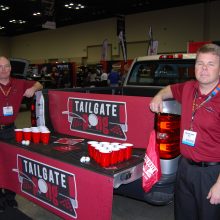 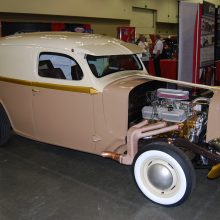 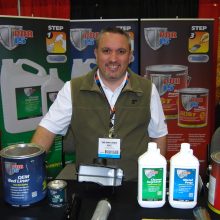