When Daniel Shrubb and Charles Woodruff sat down in 2008 to brainstorm ideas for an automotive-centered youth program, the senior officers at the Oxnard, California Police Department hoped to positively impact just one kid in their community.

Five years and more than 100 students later, Shrubb and Woodruff’s brainchild has helped nearly 20 students from Oxnard attend local colleges and many of those students are working toward automotive-related careers.

The program, called Drag Racing Against Gangs and Graffiti (DRAGG), supplies an alternative to gangs and graffiti by providing a hands-on environment for youth to gain experience in the automotive industry. The program at nine schools in the Oxnard Union School District offers students credits for participating in after-school classes twice a week.

“We’re running interference in their lives,” says Shrubb, an Oxnard native and 15-year veteran of the Oxnard Police Department. “If they have something to do, they’re not going to get into trouble.”

DRAGG’s (www.draggteam.org) success draws from the perfect combination of components: law enforcement, the school district and support from the community and the auto industry.

“It’s a great collaboration by all,” Shrubb says.

The nonprofit program is operated by volunteers and funded by donations, sponsorships and grants from aftermarket businesses such as Vortech Superchargers, Borla Performance, Ford Racing, AV Tire, Wal-Mart and Mothers Polishes.

“We facilitate everything that has to do with the program like coordinate field trips and maintain relationships with sponsors, while volunteer instructors write and teach the automotive curriculum,” Shrubb says.

Classes are taught by high school instructors and approved by the school district for credit. For nine months out of the year, students learn basic auto body skills, which they use on project cars. The students also participate in field trips to local auto companies like Oxnard-based Borla Performance Industries, take behind-the-scenes tours of institutions like the county jail and airport, and attend racing events and local festivals.

“We’re trying to help kids learn that the automobile industry is not just about changing oil,” says Woodruff, also an Oxnard native who has served on the Oxnard Police Department for more than 18 years. “There’s a whole industry you can be a part of. So many businesses have opened their doors to us and have offered so much support.”

At the end of the school year, DRAGG hosts a big graduation and awards scholarships to students that have excelled in the program to local community colleges in amounts ranging from $500 to $2,000. Sponsoring companies like Wal-Mart, Target and Fry’s Electronics have also offered participants jobs and internships upon program completion.

Woodruff and Shrubb agree that seeing students graduate from the program is one of the most rewarding aspects of DRAGG.

“It’s a lot of work, but when you see kids in the program go to college and approach you to tell you how well they’re doing, it’s all worth it,” adds Woodruff, who loves seeing students return to DRAGG to talk about their experiences and success.

‘Fastest Police Car on the Street’

Getting DRAGG off the ground wasn’t easy. Woodruff and Shrubb didn’t gain funding until two-and-a-half years after they drafted their idea in 2008. They wrote many grants and proposals and even went door-to-door to recruit sponsors.

“The hardest thing for us was the realization that it wasn’t going to happen overnight,” Woodruff says.

Both auto enthusiasts, the law enforcement duo’s initial idea didn’t involve an instructor-taught program, but rather just building a cool vehicle to raise awareness about gangs, graffiti and other common issues in Oxnard.

“We thought, ‘Let’s build a cool car and go around to schools, educate kids about not getting into gangs and graffiti-ing walls and about the consequences that surround those offenses,'” Shrubb says. “Then it morphed into getting a shop and creating a safe environment for kids to come and get school credit.”

Shrubb and Woodruff started by purchasing a used Ford Mustang GT to deck out and soon had product donations from several aftermarket manufacturers.

The 2006 Ford Mustang GT was converted into a modified street-legal Oxnard Police Department DRAGG Interceptor. The Mustang, which is capable of 500 hp on the dyno (a typical police car is about 300 hp), is equipped with a 4.6-liter V-8 engine with variable timing and three valves per cylinder. Other additions include a Vortech Supercharger, Borla exhaust system, Eibach Pro-Kit springs and sway bars, 18-inch Foose Nitrous Legend wheels provided and installed by Oxnard’s AV Tire, and custom paint by Oxnard-based Commercial Auto Body.

Once the car was built, the officers decided to establish an educational program for juniors and seniors in high school.

“We decided to do the program at the high school level because at the teenage age, you have to make so many decisions,” Shrubb says. “For our name, we picked the two worst things in our city-”gangs and graffiti-”and drag racing, because we’re always trying to race toward the finish line in some way. We’re trying to help kids race toward success.”

The first DRAGG program kicked off in 2011 with fewer than 10 kids; now classes have typically more than 20 students. Classes take place in a 2,300-square-foot facility located in close proximity to the high schools, so kids can bike and walk to the building after school if they can’t drive.

“We concentrate on high school students, but we don’t turn away kids,” Shrubb says. “If a kid shows up at our program, they may not say it, but they’re asking for help. If you need us, we’re here.”

‘Just a Couple of Cops’

Woodruff and Shrubb joke that they are “just a couple of cops,” but DRAGG’s success proves otherwise.

Students and staff members have had the opportunity to meet and discuss the program with celebrities such as auto industry great Carroll Shelby, race car drivers Justin Bell and John Force, custom car designer Mad Mike and Batmobile creator George Barris, to name a few.

DRAGG also gives students the opportunity to participate in an auto shop atmosphere they might not have access to at their high school, often due to lack of funding for the subject.

“We pick up the slack for schools where kids aren’t able to do automotive,” Woodruff says. “They can come over to us and get exposed to the auto industry.”

Darrell Cleveland, “Mr. C,” has taught automotive for more than 27 years and began teaching for DRAGG in 2012. While the subjects Cleveland covers in DRAGG are very similar to the ones he teaches during the school day, he says the after-school course’s three-hour time frame and smaller class sizes allow him to dive deeper into subjects and formulate more close relationships with students.

“We’re watching kids get serious about careers in general, specifically automotive-related in some way or another,” Cleveland says. “So that’s been really neat to see.”

“We take them to tour facilities of local manufacturers and shops,” Cleveland says. “We try to expose them to as many areas and experiences as possible in the automotive industry.”

Once the program got off the ground, DRAGG was able to add another project car-”a 2014 Ford Focus ST. The vehicle, which was displayed at the 2013 SEMA Show along with DRAGG’s Mustang, has a 2.0-liter turbocharged EcoBoost four-cylinder engine, Ford Racing intake system, Borla exhaust system, Ford Racing/Steeda short-throw shifter, Vortech front intercooler, Eibach Pro-Kit springs and sway bars and 19-inch Motegi Wheels, provided (and powder-coated) by AV Tire Service.

“We kind of look at our cars now as mascots of our program,” Shrubb says. “We have two cars and an outfitted van to transport the kids around. I never expected so much.”

While DRAGG has garnered many supporters, Shrubb says funding and making plans to grow are still obstacles.

“It’s not easy because people want to know where their money is going and how it’s affecting the community,” Shrubb says. “It’s not a matter of creating interest, but the fact that we want to grow and have all the right components in place. Because we’re working with children and youth, we have to make sure the decisions we make are in their best interests.”

Schools, as well as fire and police departments in other municipalities, have expressed interest in launching their own DRAGG programs. Shrubb and Woodruff are open to expanding, but will proceed cautiously to make sure all of the kids are taken care of.

“We’re working on our model right now, but our long-time goal is to have it at other agencies,” Woodruff says. “Our No. 1 goal is to help the kids; everything else is just extra.”

Other possible initiatives include renovation and upgrading a vehicle to auction off for fundraising and marketing purposes and acquiring more funding for scholarships, possibly even a full-ride to a nationally recognized automotive college, Woodruff says.

“We’ve been able to meet the greatest people in the auto industry in the past three or four years,” Shrubb says. “We feel so blessed. It’s been a lot of work and we’re kind of tripping over our shoelaces as we go here, but it’s a huge support base and we’re excited for what’s to come.” 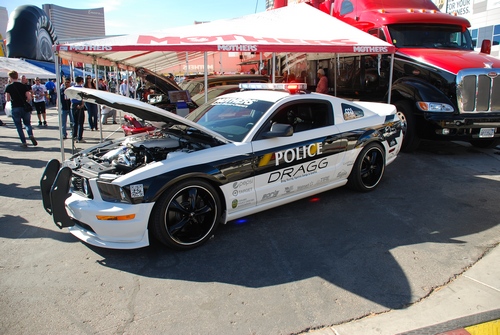 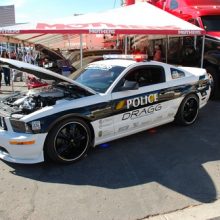 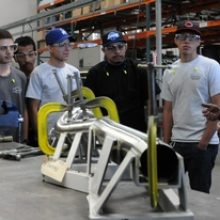 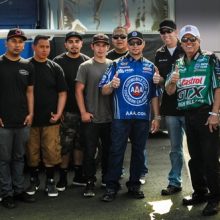 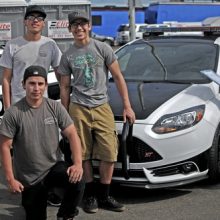 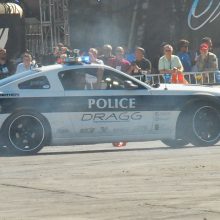